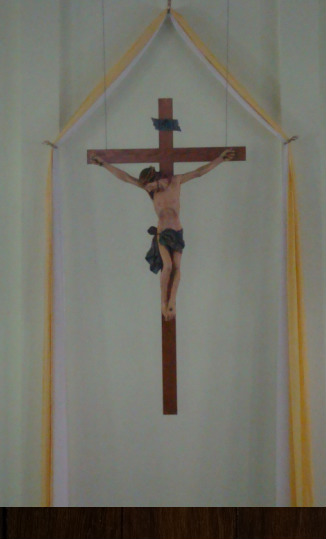 In June, 2007 Most Reverend Peter J. Jugis, Bishop of the Diocese of Charlotte, announced that St. Joseph Catholic Church in Kannapolis, now a mission of St. James the Greater in Concord, would become a parish on July 1, 2007. This announcement was met with great joy by the parishioners of St. Joseph and was celebrated on October 7, 2007 at a special 3:00 pm mass followed by a family event consisting of potluck dinner, strolling music, special presentations by church groups and other activities. This however was not the first time St. Joseph has been a parish. What follows is the "rest of the story".

In 1944, North Carolina was a mission territory for the Catholic faith. When you included travel, attending mass was a day long event. Bishop Vincent Waters, Diocese of Raleigh, decided that celebration of the mass would be more frequent if more parishes were established. At that time the Raleigh Diocese encompassed all of North Carolina so the parish of St. Joseph was a child of Bishop Waters vision.

On a bright Sunday morning in June 1945, four or five people traveled first by bus and then by foot a quarter mile to the home of Gladys Burton on McLain Road, where they met others to celebrate the first mass for the newly formed parish of St. Joseph. Father Francis Funk, a Redemptorist priest, celebrated the first mass.

Soon, six acres of property and two four room frame houses on James Street (later to be named St. Joseph Street) was purchased. One of the buildings was renovated to serve as a chapel. On Christmas Day 1945, mass was first celebrated on the site we still occupy today. It was memorable for many reasons, including the fact that after that mass Father Funk was taking some of the parishioners to one of their homes for Christmas dinner and ran into a ditch in a snowstorm. The group had to walk the rest of the way to the home. There were sixteen charter members of St. Joseph.

In 1946, St. Therese Catholic Church of Mooresville became a mission of St. Joseph, and would be for a number of years until they were designated a parish.

On April 14, 1949, a fire destroyed the chapel. One of the few items saved was the statue of "The Infant of Prague", which still remains in our present sanctuary.

For the next few months mass was offered in various locations. In September 1949, a military chapel was purchased. The structure was disassembled and transported to Kannapolis where it was reassembled in time for Midnight Mass on Christmas Eve 1949. A parishioner rode on top of the disassembled chapel coming through Kannapolis to make sure the structure cleared all the overhead wires. This chapel served St. Joseph's well until the year 2000, when it was demolished to make way for our present sanctuary.

In the 1960's membership began to decline for various reasons. Eventually religious education classes for children and other activities were minimal. In 1967 when the Bishop needed a priest immediately for a parish in crisis he decided to move the pastor for St. Joseph and make St. Joseph a mission of St. James in Concord. This status remained until July 1, 2007.

Becoming a mission church made the struggle to grow more difficult and the decline continued in to the 1970's. There were discussions the diocese may close St. Joseph. The church grounds were in a bad area. Windows were being broken and trash was dumped on the proptery. Bars were installed on the windows of Downing Hall to prevent break-ins and vandalism.

In 1972 the Diocese of Charlotte was established. In 1975, the Redemptorist Fathers returned to the area. They took over St. James and thus also St. Joseph. Sometime in the 1970's the parishioners of St. Joseph decided more had to be done if they were to hold on to their parish mission. The decision was made to clean up the grounds--ask police to help in keeping trash from being illegally dumped on the property--improve conditions of the church building--clear some of the land which would make monitoring easier--install an alarm system--and resurrect religious education. They also made a conscious decision to meet and greet all newcomers. All of this would take effort and money.

In the early 1980's IBM and Philip Morris moved into the area bringing many Catholics with them. St. Joseph mission was ready. Money had been raised making possible many of the items needed--religious education was made available--paneling added to the church building---painting done---property cleared. This was all accomplished by various groups who called themselves St. Joseph workers. One of these groups was called "the bag ladies". They were responsible for picking up trash on the grounds. The first yard sale was held. This grew into the annual bazaar which included many hand made items. Although many men were definitely involved in the beginning of St. Joseph workers, the women's group gradually became what we know now as St. Joseph Ladies Guild.

As religious education was revived, the need for more space was evident. The parish approved and permission was given to purchase a modular mobile building to house classrooms. The building arrived in 1985. The parishiioners had raised money and had the total amount to purchase this building, so no debt was incurred.

Many events were held over the next few years-- St. Patrick Day parties where Fr. Washington showed us how to do the Irish jig--potluck dinners--parish picnics--and twice yearly clean up days with the Ladies Guild providing lunch. It became apparent that were outgrowing Downing Hall and plans began for another activity center. A master plan was developed with the Activity Center being the first building. A capital campaign was begun.

The 1990's was a decade of explosive growth for St. Joseph. Approval was given and the present Activity Center was built and opened in 1992. This was a major debt undertaken at this church. On the church building all of the asbestos siding was removed and new siding installed. The deck for the trailer was renovated with new wood and Downing Hall was subdivided into three rooms. We also added our first paid employee--part time--the director of religious education.

The Hispanic population began to grow in this area. They needed a church to hold mass. St. Joseph was suggested and we welcomed the opportunity. It began with an occasional weekend mass and then a regular monthly mass. A Spanish speaking priest, usually Fr. Joe Waters, would travel from another area to hold the Sunday evening mass. This continured until 1996 when the Redemptorists appointed Fr. Karl Aschmann to St. James, Concord, and the pastor there assigned him to St. Joseph as his main duty. Fr. Aschmann had been a pastor in Florida after spending 30 years in Paraguay and was fluent in Spanish. He had come to Concord expecting semi-retirement but it was not long before the Spanish began flocking to St. Joseph and it became necessary to add a regular Sunday mass in Spanish. The regular Sunday mass in English was also overflowing. We added Spanish religious education classes and St. Joseph became a model for the diocese on a bilingual Catholic church.

Within a short time it again became evident that a capital campaign was imminent. In 1998 the process was started for an expanded sactuary. The first objective was to pay off the loan for the activity center and begin a fund for an expansion. Initially plans were to expand the Activity Center to make a temporary church. Town meetings were held and many ideas were discussed with no concensus. The architect felt we were really in need of a separate new sactuary. He came to a meeting with plans for this and at that meeting the committee decided he was right. We could not expand the present activity center and get what we needed. This was explained to the parishioners and a meeting was set up with the diocese building committee where the plans were presented. The diocese approved us to go ahead, recognizing our need, even though we were not close enough to having the minimum amount of money for regular approval.

In 1999 masses were moved out of the old building and into the Activity Center feeling it was unsafe to have that many people crowded into an older wooden building. Pews had been purchased from a church closing in Philadelphia and some parishioners traveled there to transport them. Two modular classrooms were given to St. Joseph by the county school system. We contracted to move them and set them up. Parishioners spent many hours repairing these classroomes including removing siding from the church building and installing it on the modulars. The first church office was established with a part-time secretary.

In a short period of time St. Joseph parishioners planned a new sactuary--obtained approval--planned the groundbreaking ceremony-- and also planned a 50th jubilee celebration for Fr. Aschmann to be held at the local high school auditorium.

In 2001, the old church building was demolished. This was a sad time for many parishioners and a difficult decision. God provided by covering the area with snow the first weekend after demolition. Construction began and even though the carpet was not yet installed the new sactuary was dedicated on October 6, 2001.

In 2002 Fr. Riquelme, a member of the Congregation of the Most Holy Redeemer from the Vice-Province of Richmond, was appointed to guide St. Joseph. He continues in this position and is now the Pastor of St. Joseph Parish. Over the last several years a lot of time has been spent fundraising to pay off the debt but many other things have also been accomplished. To improve the spirituality, the former cry room has been converted to a chapel used for Blessed Sacrament Adoration. The figures in the chapel were hand painted by one of the parishioners. The sacristy floor and steps have been tiled. Various prayer groups have been established. and evengelization programs are being conducted. An improved sound system and a video system have been installed. Much landscaping has been done.

The bilingual multicultural Spirit filled parish of St. Joseph is made up of a spiritual, welcoming group of Catholics and is now looking forward to more growth as Kannapolis development continues to expand.